Piglets and broiler chickens can grow and thrive on Norwegian proteins

Piglets and broiler chickens perform just as well or even better when fed novel feeds based on protein such as yeast, produced from Norwegian spruce trees.

Piglets and broiler chickens can grow and thrive on Norwegian proteins

Today, the most common protein sources in animal feeds in Norway are grass and grain. In addition, imported legumes and seeds, such as soy bean meal and rapeseed meal are used, and also marine protein sourced in Norway. To further increase domestic as well as global food production to feed a growing population, there is a need to develop new protein sources. They should come from sources that are resource-efficient (arable land, water, energy input, etc.) and utilize biomass not used directly to produce human food.

During the last three years, the industrial PhD candidate in Foods of Norway, Ana Cruz, has studied the use of yeast derived from sugars from Norwegian spruce as a protein source in diets for young pigs and chickens.

“My thesis shows that protein from yeast can replace some of the conventional protein in feed for young pigs and chickens,” explains Cruz, who is an employee at Felleskjøpet Fôrutvikling (FKF) and a PhD student at Norwegian University of Life Sciences (NMBU). Her PhD is a part of the Research Council of Norway’s industrial PhD program.

Ana Cruz is defending her thesis publicly on November 15th, 2019, at 12:15 pm in H 109 at the Department of Animal and Aquacultural Sciences, NMBU.

To obtain high growth performance, young pigs and chickens need a high-quality feed with 17 and 20-23 per cent protein, respectively. Pigs and broiler chickens currently get their proteins mainly from soybean meal, fish meal and rapeseed meal. In Norway, only five per cent of the proteins for farm animals are produced here.

In her PhD study, Cruz found that up to 40 per cent of the proteins in the diet for young pigs can be replaced by yeast. The pigs that were fed the yeast-based feed ate well and grew well, but there were no significant differences in growth performance between the yeast diet and the conventional control diet. Also, the energy and nitrogen metabolism in young pigs was not affected by the different protein sources.

This is the first study of its kind assessing yeast produced from tree sugar as a feed resource. In previous studies, other substrates have been used to produce yeast, such as by-products from beer breweries.

Ana Cruz also found that chickens could be fed diets with 10 percent protein from yeast with no adverse effect on growth performance. At higher inclusion levels of yeast (20% and 30%), performance decreased. This could be associated with the higher temperature observed during the pelleting process. High temperature during feed manufacture could induce changes in the protein structure of the feed, leading to reduced protein digestibility and reduced performance.

The protein of the future

Using yeast as a feed ingredient is not new. In Europe, yeast has been used in animal feed as an additive since the 1950s. However, using yeast as a main protein source – constituting more than five per cent of the diet – has not been tested before. What is new is the technological progress that opens up for a sustainable and profitable fermentation process.

According to Cruz, her study is highly relevant for European and Norwegian livestock production. Everyone is looking for alternatives to rapeseed meal, fish meal and soybean meal. Soy and rapeseed need arable land and a conducive climate to grow. Fish meal is a very good protein source, but fish is a limited natural resource, and its inclusion level in animal diets is restricted because of the taste and smell it can transfer to meat products.

This yeast strain is already approved as a feed ingredient in animal diets by the European Commission, which makes it easier to put it into practice.

“In my opinion, this study is valuable to the entire livestock sector in Europe, to feed producers like Felleskjøpet, distributors, farmers and even consumers. Farmers can expect reduced diarrhea in piglets, which is also good for animal welfare. The consumers would also want to benefit from more sustainable meat products, as they have become more conscious about the environment and animal welfare,” says Cruz.

Cruz would very much like to continue working with the feed industry in Norway.

“I have learned a lot about animal nutrition during these years. I want to bring more knowledge into the industry about alternative protein sources in animal feed,” says Cruz.

Professor Margareth Øverland at NMBU, Cruz’s main advisor during her studies, says the results obtained in piglets and broiler chickens are very promising. “They are similar to what we found in Atlantic salmon, where we replaced up to 40% of the protein in fish meal with yeast. The yeast also had positive effects on the gut health of the fish.”

What is needed before this innovation can be used?

Øverland points out that the advantages have been demonstrated, but we need to continue this research so it can be a real alternative feed resource that can be produced in large volumes with lower costs.

“Foods of Norway has 19 research and innovation partners and they will play a critical role in bringing the new feed solutions to market,” she says.

“Sustainable raw material supply has been a part of Felleskjøpet for more than two decades already. We were among the pioneers asking for “Identity Preserved – IP” certificates from the beginning. They now have evolved considerably from those early days, but it all started with a desire to document the origin of the raw materials we bought.

Now we are in the starting phase of a new era. From now on we will see more and more feed, as well as food, derived from sources that currently do not belong to the food chain. Felleskjøpet has a history that goes back more than 100 years. We want to play a role for the next century as well. To be relevant for the future we must build knowledge today. That is why Ana’s Ph.D is important for us and for society at large”, says Knut Røflo, Managing Director of FKF.

“I am sure we will see protein factories being built in less than 5 years after technology is proven to be profitable. Nobody will invest the amount needed unless there is a healthy business case behind. It is as simple as that”, he adds. 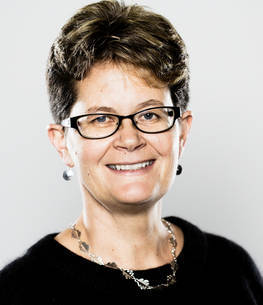