2016 has been a productive, initial year for Foods of Norway. This newsletter gives you an update on some of our research and outreach activities.

We would like to take this opportunity to wish you all the best for the holiday season!

Photo
Håkon Sparre.
During 2016, Foods of Norway researchers have given 50 talks at seminars and meetings, including Aftenposten's annual climate conference, which this year focused on the oceans.

Some 1200 people heard Foods of Norway researcher Jon Øvrum Hansen talk about how biomass like spruce and macroalgae is being converted to novel, sustainable animal feed ingredients.

During 2016, research collaboration between Foods of Norway and the University of Chile was established and strengthened.

Research collaboration between Foods of Norway and University of Chile.

Photo
Liv R. Bjergene
Cristina Ravanal, a researcher at the University of Chile, Institute for Cell Dynamics and Biotechnology, visited NMBU in September. Ravanal's research visit was part of a strategic collaboration between Foods of Norway and ICDB to develop new technologies for producing bioactive compounds, chemicals, feed and food ingredients and biofuel from seaweed.

Photo
Shutterstock
In November,  the collaboration was futher strengthened when researchers from Foods of Norway visited Chile and had meetings with the University of Chile, potential industry partners and the Norwegian Embassy, among others. The aim is to maximise the use of biomass. 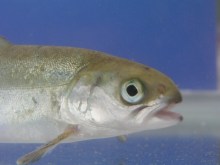 Photo
NMBU
To improve feed efficiency for farm animals is a central part of Foods of Norway. By 2030, more than 50 % of all fish and seafood products will originate from aquaculture. One way to increase production is to select for the most efficient animals. Together with researchers at NMBU and Aquagen Phd-student Hanne Dvergedal is developing a direct selection method for genetic selection.

Photo
Liv R. Bjergene
On October 27, Peyman Mosberian Tanha defended his PhD degree with his thesis on how environmental challenges aggravate the negative effects on a plant-based diet in fish. In conjunction with his defence, Foods of Norway arranged the seminar Fish feed for food security.

Photo
Janne Brodin
In October, all partners met to plan the Foods of Norway activities for 2017. Based on the discussions, the annual plan for 2017 was approved by the board in November.

We are also planning:

During 2016 three scientific publications and one masters thesis associated with Foods of Norway have been published.

Photo
Liv R. Bjergene
Ragnhild Ånestad is Research Assistant and works closely with Foods of Norway researchers running experiments with fish and farm animals. This autumn Ragnhild has been in charge of developing methods for measuring digestive enzyme activity. By mapping and testing various methods she has selected the most useful methods for the research in the centre.

Media interest for Foods of Norway continues to be massive. During 2016 there have been 74 articles about Foods of Norway in Norwegian and international media, including five chronicles.

In January 2017, Foods of Norway research is promoted in the program "Utan mat og drikke". The focus is on food security and follows a family trying to survive for one month on Norwegian produced food solely.

On our website you will find updated lists of electronically accessible news items. These are some of the latest items:

About Foods of Norway:

This is the third newsletter from Foods of Norway to update you on progress and events. Foods of Norway is the first Centre for Research-based Innovation (SFI) at the Norwegian University of Life Sciences. The Foods of Norway consortium comprises four departments at NMBU, five international academic partners and 18 partners in industry and innovation, representing forestry, aquaculture and agriculture.

Foods of Norway will help facilitate the transition to a bioeconomy and find solutions that can address one of the major challenges faced by Norway’s fish farming and livestock industries: the dependency on imported feed ingredients, such as soy.

The aim is to develop new, innovative biorefining techniques to convert natural bioresources, such as trees, macroalgae, grass and wet organic co-products into high-quality feed ingredients for fish and farm animals. To ensure more food from feed resource inputs, Foods of Norway has a special focus on breeding strategies to increase the feed efficiency and robustness of fish and farm animals.